This is likely to remain one of the most detailed pieces of information about the plot we are going to publish. It provides a concept on why the Nazis continue searching for Atlantis after the Colossus has been destroyed. The basis for this article is one of several "revision proposals" discussed among the team. While detailed, we will neither confirm nor deny its inclusion in the present story draft.

This proposal seeks to modify the following story elements:

The main motif for the Nazis to discover Atlantis is not a romantic longing for the alleged "Homeland of the Aryans" (there existed an undercurrent of Nazi Atlantology in this direction). At this time during the war, in the autumn of 1944, the only reason why they would launch an operation of this magnitude is their desperate need to obtain an effective new weapon for the Reich that can be deployed immediately, and that is capable of forcing the Western Allies to surrender unconditionally. The Atlantis operation is a last-ditch effort to turn the tide and win the war. With Allied forces already standing on German soil, and with the Wehrmacht forced to retreat on all frontlines, time is running out. 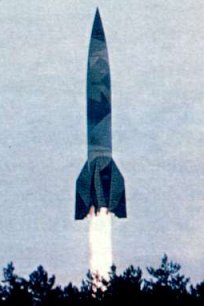 In this desperate situation, the Nazis seek to harness the power of the mystical metal orichalcum, in order to use it for bombs. The Nazis have discovered clues that the Lost City of Atlantis features a large reservoir of the metal. The enormous energy cast into every single orichalcum bead will, if detonated in large quantities, yield an explosion similar to that of a nuclear device, releasing huge amounts of thermal and blast energy. A dozen orichalcum bombs would be sufficient to lay waste to an entire city.

Since Allied air superiority is total, there is no way to use bombers or other planes to deploy the orichalcum bombs. Instead, the Nazis are planning to equip V2 rockets with orichalcum warheads, and launch them against London. Furthermore, they want to transport them to the US East Cost by submarine, and attack the city of New York. The commanding officer of the operation, von Roth, believes that such an attack would force both England and the United States to enter into peace negotiations, especially as the US nuclear weapons program, the Manhattan Project, is still months away from completing the world's first atom bomb.

Picking up on previous research carried out by Dr. Übermann and Klaus Kerner, the Nazis set out to find Atlantis, as well as build a construction plant to develop and produce the orichalcum bomb. Since the foremost authority on the field of orichalcum weapons research, Dr. Übermann, perished in the destruction of the Colossus, they send out a search team to track down his former assistant, now the most knowledgeable man on the subject: Dr. Wolfgang Egger.

This is an attempt to provide a realistic background for the--obviously highly fictitious--plan of the Nazis to turn the tide of the war by pressing Atlantean technology into service. At a time when the Third Reich was about to collapse under the unyielding pressure of the Allied forces, this kind of operation would not have been approved without definitive military gain. That's why I'm suggesting to downplay aspects previously considered as the main motif, e.g., pseudo-scientific research aimed at discovering the "Homeland of the Aryans". This variant of Nazi occultism may still play a minor role, but what von Roth really wants is the orichalcum, and thus the bomb. 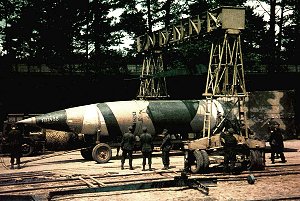 I am also suggesting this solution because Nazi high technology and advanced weaponry ("Wunderwaffen") are a staple of many Indiana Jones plots. A good example is the "flying wing" from Raiders (Lucasfilm even considered a jet plane during pre-production, see the illustration in The Star Wars Archives, p. 136).

The V2 rocket is a well-known German development, and should have a much greater impact on the player than an entirely fictitious weapon.

The concept would also highlight how desperate a situation the Nazis are in at this stage of the war, and that they will therefore pursue their evil intentions with even more ruthlessness and cruelty than before. If von Roth succeeds, he may hand the Reich its ultimate victory. If he fails, all will be lost.

The A4 (Aggregat 4) was the result of a continuous rocket development program initiated in Germany in the early Thirties. The A4 was later dubbed "V2" (Vergeltungswaffe 2) by Goebbels, clearly designating it as a measure to "retaliate" on the Allies. Development was spearheaded by the technical director of the German rocket centre at Peenemünde, Dr. Wernher von Braun (who would later go on to lead the US space program with NASA). 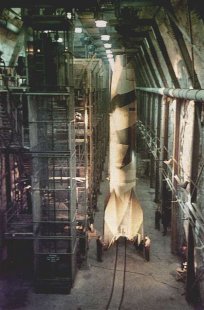 Originally funded and controlled by the Wehrmacht, the rocket program later came under the auspices of the SS. After several devastating air strikes on Peenemünde, rocket development and production was gradually moved to several underground facilities, the largest of them Mittelbau/Dora near the city of Nordhausen in central Germany. The V2 was then mass-produced at high human costs with the aid of concentration camp prisoners. It is estimated that approximately 26,500 of the 60,000+ detainees did not survive. This horrific figure means that more people died during the production of the V2 rocket than as a result of its military deployment.

The first V2 was fired on London on September 8, 1944. Attacks were kept up until March, 1945. Of the 6,000 V2 rockets produced, some 3,500 were launched toward England as well as continental objects. The rocket hit its 'target' (basically a random spot within an area approximately the size of a larger city) at supersonic speed, resulting in the remarkable effect that its approach could only be heard after the impact had occurred. The high velocity also rendered defence measures useless. Unlike the V1 flying-bomb the V2 rocket could not be shot down.

Designated by Hitler as a "retaliation weapon", the V2 was mainly supposed to be launched against London to further weaken the (presumably war-weary) spirit of the British people. However, it was also used as a 'tactical weapon' against Allied supply areas in the Netherlands, and ultimately more V2s were launched against Antwerp than London. Due to the low accuracy (its CEP was around 17 km) this tactical deployment of the V2 rocket was a complete failure, and its actual use thus confined to that of a terror weapon with little to no influence on the course of the war.

Unlike the common notion that the German rocket weapons entered service too late to have a significant influence on the war, it rather seems that they were deployed too early, at a time when electronics was still in its infancy. While the V2 was a technical revolution in many respects, it was still too primitive and inaccurate to be used as an effective weapon. Ironically enough, it may have shortened the war as the enormous funds invested in the German rocket program could have been better spent on other, more effective weapons (such as fighter planes to combat the Allied bomber fleets that would gradually destroy Germany's industry).

The only scenario in which the V2 would have had an actual chance to influence the war would have been it's usage as a ballistic nuclear missile. However, the Reich was still years away from developing a deployable atom bomb at the end of the war.

The Manhattan Project, initiated by Albert Einstein out of fears that Germany could first succeed in developing an atom bomb, constituted about the same financial and economical burden for the United States than did the German rocket program for the Reich. In the end, however, the V2 turned out to be highly ineffective (due to its conventional warhead and miserable accuracy), whereas the atom bomb proved to be the 'ultimate' weapon. With the help of German rocket scientists transferred to the United States after the war, both developments were then combined to create the first nuclear ballistic missiles. The Redstone rocket (essentially just an improved V2) was later modified to transport the first American satellite and then the first American astronaut into space.

As the war progressed, German rocket programs multiplied in a desperate attempt to come up with weapons that would at least prolong the war.

One of these projects consisted of the idea to transport V2 rockets by submarine to the US East Cost, and then to fire them on Manhattan. The V2 had a range of only 300 km, which would have made it necessary to transport it across the Atlantic ocean, and launch it in relative proximity to the target area.

The rocket was supposed to be transported in a container that would be towed by a class XXI submarine, and which could be submerged in order to travel underwater. It is hard to see how such an attack should have had any effect (besides the possibility of swift retaliation through increased Allied bombardments), but despite the obvious futility of the concept actual research was carried out, and a German shipyard even was commissioned to construct the first missile containers, and was ordered to have them ready for testing in March or April of 1945. Due to the end of the war, none were completed.

Considerations to tow large containers using submarines dated back to 1943, when experiments of this kind proved successful. The concept of using this method for a sea-based launch of V2 rockets however was only discussed in the autumn of 1944, when the Allied advance threatened to impede the sustained launching of V2 rockets against London.

As you can see, the proposal is a mixture of actual historical events and purely speculative fiction. This is true for many Indiana Jones plots involving the Nazis: their capabilities of building weapons and sending troops all around the world are thus embellished (Raiders being an excellent example: neither had the Germans an operational "flying wing" airplane in 1936, nor were they able to excavate artifacts in British-controlled Egypt). This portrayal of the Nazis suggests that, from a technical standpoint, they might be able to succeed in their evil plans, but due to their complete lack of moral integrity they always fail to control the powers they uncover, and eventually succumb to them.

This is a work of fan fiction. We make no claim to the characters, storylines, situations (whether trademarked, copyrighted or otherwise protected by federal, state or other intellectual property law) of George Lucas, Lucasfilm Ltd., Lucas Arts or any of their respective affiliates or licensees that hold rights to any intellectual property herein alluded to, used, expanded upon or in any way affected by this work. This work is produced solely for the personal, uncompensated enjoyment of ourselves and other Fate of Atlantis fans, in accordance with the "Fair Use" provision of Title 17 of the US Code. This work may be freely distributed provided each of the following conditions are met: (1) the above disclaimer accompanies all copies; (2) the work is distributed in its entirety, and (3) no consideration is requested or received. Distribution of this work not in accordance with the aforementioned procedures shall be deemed unauthorized and, as such, is strictly prohibited. This work and other materials posted to this web page are the sole creation and derivative work of the AmberfishArts Team, without license or permission from Lucasfilm or LucasArts, Ltd. Some images as seen on this website are the property of Lucasfilm or LucasArts Entertainment Company.